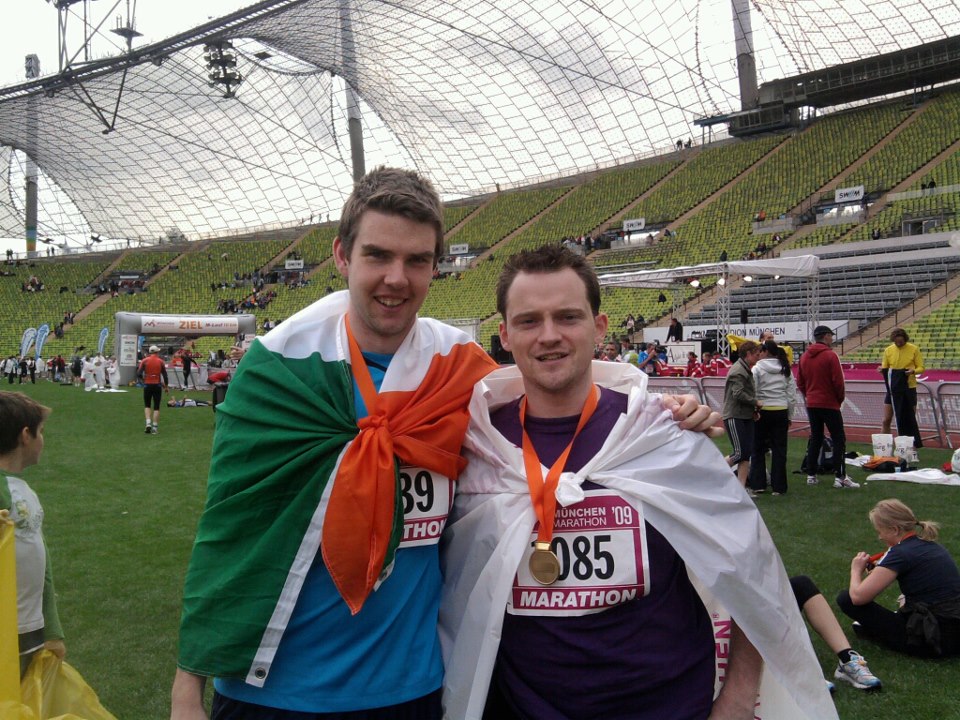 My First (and last) Marathon

By Mark CaulfieldOn 10th October 2009, the night before our first marathon (I was running with friend Shane Edwards), Ireland played Italy in a World Cup Qualifier. The game ended 2-2 in an agonising fashion with Italy equalising in the 89th minute. We said we would only have 1 or 2 beers (with grub for soakage obviously) and that’s all we had. Add on 5-6 Lucozade’s, 7-Ups, Coke’s and you’ve a sugar bomb that just won’t let you sleep!!!

Eyes closed at about 3am I think, alarm set for 6am to get breakfast, back to bed for an hour or two and get up about 8:30am just in time to stroll over to the start line which was only across the road from our hostel. In the queue with 8000 others on a fresh but dry morning we slowly shuffled past the start line with the adrenaline pumping and Irish flag wrapped around my waist! I’m a patriot!

I had tried and failed on 2 occasions to train alone for a marathon. Honestly, I felt I was fit enough BUT I got wicked bored running alone for anything past 6/7 miles. When I started in Spirit Shane and I spoke about doing a marathon and we decided we would train for Munich. Why Munich?

We wanted to train all Summer and the Dublin Marathon seemed the obvious choice. But, I know Dublin. I’d know where I was, where I had to go and how long was left. It would destroy me mentally. So we said we’d run around a city we didn’t know and Munich fit the bill. We both lived in Gracedieu, worked similar shifts and were paced about the same so training together was easy logistically.

3 times a week. Regular as clockwork. From 5-18 miles over the course of 6 months from March to October.  The reason we only went to 18 miles was during our 18 mile training run, 1km from home, I stepped off a kerb, jarred my knee and walked back. It would only be another 8.2 miles on the day, excitement alone would get us through right? No point risking an injury 3 weeks out!

26.2 miles, or 42.2 kilometres if you’re in Germany. Lovely, a reminder of how long we’ve left every 5 minutes or so! From the city centre, local parks, back to the city centre and finishing in the Olympiastadion was special. Four moments stand out in my memory as I type; the square, my knee, entering the stadium and the final lap.

Running through the square we decided to raise the Triclour over our heads. There were hundreds of people lining the route and Munichs equivelant of the WLRfm blastercaster broadcasting in German. That was until they spotted us! “Here comes Mark Cauvield und Shane Edvards from Ireland” followed by a big cheer and clapping! Brilliant moment!

With 5 or 6 miles left, and feeling very tired, my knee wobbled and jarred. Looking down my right kneecap had moved to the right. I moved it back, walked it off and kept going! The Germans did it right, with half a mile left, the water stations were replaced with a beer station. A little glass of beer to toast that you were nearly there. It was absolutely beautiful.

We entered the stadium through a tunnel under the stand which had smoke machines, music blaring and flashing lights. What a buzz after 26 miles to know that you had only 1 lap left. We got cheers and “Go Ireland” a few times as we ran and we even sprinted the last 100m leaving out a big roar (that you’ll hear in the video). A finish time of 4 hours, 21 minutes and 33 seconds is hardly setting the running world alight but finishing your first marathon is special no matter what the time is! We collected our medals and collapsed on the field for about 45 minutes. Big mistake. It was nearly impossible to get up, let alone walk up the steps to get out of the stadium (pic above).

My advice would be to keep moving, light stretching and plenty of water and a big recovery meal loaded with carbs and protein. I simply ate everything I could for the next few days. You learn a lot about your body in 26.2 miles. I found out that my hips were my weakest asset! I was running like a broken man for much of the last 10 miles. The only way I would even attempt another marathon is……actually, no, I’ve done one and that’s enough for now! Before you set out to train for a marathon ask yourself this question….will my body make it through it? Have you trained for 5 miles. 10km’s, 10 miles or half marathons before? If not, don’t just jump into full marathon mode because your body might not appreciate it!